Two months ago, in mid-February, I decided that it was time to leave my role as HOBT's Executive Director. Over nearly five years, I believe we made large strides in the work of dismantling structural inequality within our organization. We learned that this work requires turning over power to communities most harmed, and over time I understood that the work would eventually require me to step aside myself. I just hoped I would know when the time was right.

In February, the timing seemed perfect. HOBT spent a year listening to artists of color and making plans to act on what we heard. HOBT  launched an IBPOC and LGBTQAI led Mayday Council to redesign the ways we engage community. HOBT’s board resolved to become a majority IBPOC body within a year. Staff would be 45% IBPOC when I walked out the door. To build workplace equity, HOBT put in place a less hierarchical staff decision-making structure, more competitive salaries, and health benefits. HOBT drafted a cultural appropriation policy and had a draft Strategic Plan to pull all of these pieces together. And there was cash in the bank!

At the same time, as a heterosexual, cisgendered white-bodied man, no matter how much I have learned or how passionately I feel about the work, I remain prone to the scripts that trip this work up and slow it down. In mid-February, it seemed there would be no better time to make room for new leadership.  I set May 1 as my last day.

Two months later, mid-February feels like an awfully long time ago. The global pandemic and looming recession that emerged since then will put every arts organization at risk, including HOBT.  After a year of HOBT reinventing itself, the organization must now reinvent itself once again. Though I am leaving in more turbulent times than I hoped, this is still the time for me to step aside and make room for others to lead. If I ever talked with you about my work at HOBT, I probably told you it felt like the most important thing I could be doing in this time and place. I continue to feel that way, and now the most important thing I can do is make room for others to lead. I am proud of HOBT’s board for securing Claire and Lisa as an interim team, and have been excited to spend these final months at HOBT supporting this transition. 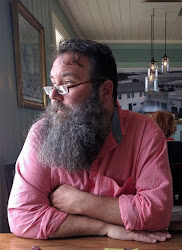